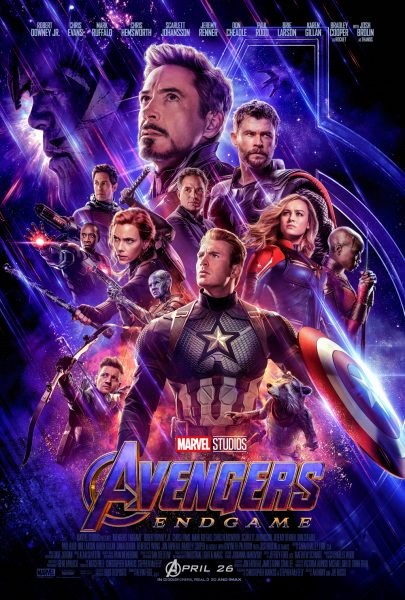 Endgame is the fourth movie in Marvel’s Avengers series. The movie has already broken theatre records and has made $2 billion at the Box Office a week after the premier. Endgame was a much anticipated movie, because it is the last movie of the series by the Russo brothers, who were the directors of the movie. The movie was to say the least, amazing.

Robert Downey shows amazing emotion in the first scene of the movie when he records his goodbyes, because he believes he will die in the spaceship.  Marvel also immediately shows us Captain Marvel in the movie when she finds Tony and Nebula in the ship. The scene afterwards was very well directed as well. Chris Evans and Downey’s conversation is very enticing and shows the audience good emotion. The brothers also give a good plot when the Avengers find out that Thanos has destroyed the infinity stones. The Russo’s then skipped five years into the future where the audience learns that Tony has a daughter, Melissa, and the remaining survivors try their best to carry on with there lives.

The rest of the movie evolves around time travel through the quantum realm, a tiny microscopic universe that slows time down. This allows the Avengers to go back in time and get the time stones. Once they use them to get back all the people Thanos killed, they will return them back to the time and place they found them. It was an obvious solution to the movie but who does not like time travel?

The heroes are successful in getting all the stones and get back the people who died. However, the heroes do not realize that Nebula was captured by Thanos and that the past and evil Nebula time travels back with the Avengers instead. This allows her to bring past Thanos to the future, bringing an epic fight scene to the movie.

Once Thanos gets to the Avengers headquarters he immediately uses his ship to fire at and destroy the headquarters. We then see Iron Man, Captain America, and Thor fight against Thanos.  After Thanos defeats Iron Man and almost kills Thor, the theatre is shocked as Captain America picks up Mjonir, because many thought that only Thor could picks up the hammer. Either way, it was a very good twist in the movie.

The rest of the battle was what one would expect from Marvel, the Avengers crushing Thanos’ army, however we did see a bad ass all women hero scene.

We then get to the saddest part of the movie as, Iron Man dies using the stones to defeat Thanos’ army. The death was very sad, as Iron Man was the very first movie that Marvel created. It was also sad to learn that when Captain America goes back in time he never comes back and instead lives his life with his love Peggy Carter. It was necessary thing for the Russo brothers to do, and it sets up the Marvel series up for at least one more movie about Captain America.

Overall, the Russo brothers did a very good job closing the Avengers series. The public seems to think so too, as Endgame has 95% on rotten tomatoes. It is always sad to see a series as successful as the Avengers end, but all good things come to an end. Marvel fans will now look forward to the new Spiderman Man Movie: Far From Home.