Walts-ing into Next Year’s Budget 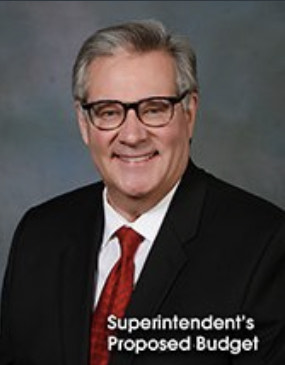 An image of the PWCS superintendent smiling.

The PWCS superintendent, Dr. Steve Walts, has presented his proposal for the 2021 budget plan. The plan focuses on an increase in staff pay, educational equity, and funding support systems for students’ mental and physical health.

Walts has been the PWCS superintendent for 15 years. During his proposal, on Feb. 05, 2020, he thanked everyone who has supported him during his time working in the county.

“I want to thank our teachers, administrators, support staff, parents, community, and school board, for their support and great successes we have achieved this year, and for the past 15 years as I have served as superintendent,” Walts stated.

The proposal presented an enticing budget plan for the upcoming year. Walts position was clear when he said, “Our students, teachers, and families deserve better, so tonight I am proposing a true needs-based budget, as is my responsibility under the state code.”

Walts plans on placing full-day kindergarten and pre-k expansions into effect in 2021. He believes that the expansion is critical for allowing students an early path towards success.

Walts also expressed his wish to increase the per-pupil funding and spending amounts. Per-pupil funding is the amount of funds the government or school district spends on every student. It is calculated by dividing the current spending costs over the entire academic year by the number of students attending PWCS. For the past 15 years, statistics show that PWCS has remained 2nd to last in the Washington D.C. metro region for per-pupil funding.

“Our core business is student success, and my top budget priority is educational equity, and academic achievement,” Walts explained. Walts went on further to say that he would like to create a ‘chief equity officer’ that could coordinate efforts to close gender gaps in access and opportunity for students and staff. The chief equity officer will work alongside the Title IX officer to ensure that there are no gender gaps.

The Title IX law states that, “No person in the United States shall, on the basis of sex, be excluded from participation in, be denied the benefits of, or be subjected to discrimination under any education program or activity receiving Federal financial assistance.”

In addition to closing the gender gap for PWCS staff, Walts has also proposed a 4.8 percent increase in pay for employees. The budget proposal will not include an increase in employee healthcare costs. Walts adds, “my second priority in this budget is to support our teachers and staff, who are at the heart of our success.”

Walts announced that two of his biggest priorities are student’s mental health and wellness and career, military, and college readiness. There will be a 5 million-dollar investment in counselors and an additional 11 social workers will be hired. Walts assured listeners that the “critical resource for our schools and families” was foremost in his proposed budget plan.

The superintendent believes, “it is critical that we fund career and technical education programs that provide the 21st century skills necessary to thrive in the digital economy.”

New programs and improvements will be implemented in high schools across the county. Gar-Field High School will add a culinary program, Osbourn Park and Stonewall Jackson will add a fire fighting program, and Woodbridge will launch Project Lead the Way software. BDHS will receive 4.1 million dollars in funding for stadium improvements.

At the end of Walts’ proposal speech, he proclaimed, “As I stated at the beginning of my remarks, the work of teachers, administrators, and staff to deliver a world-class education without world-class funding is remarkable. Now is the time to make the investments in our children, our teachers, our schools, and our community.”